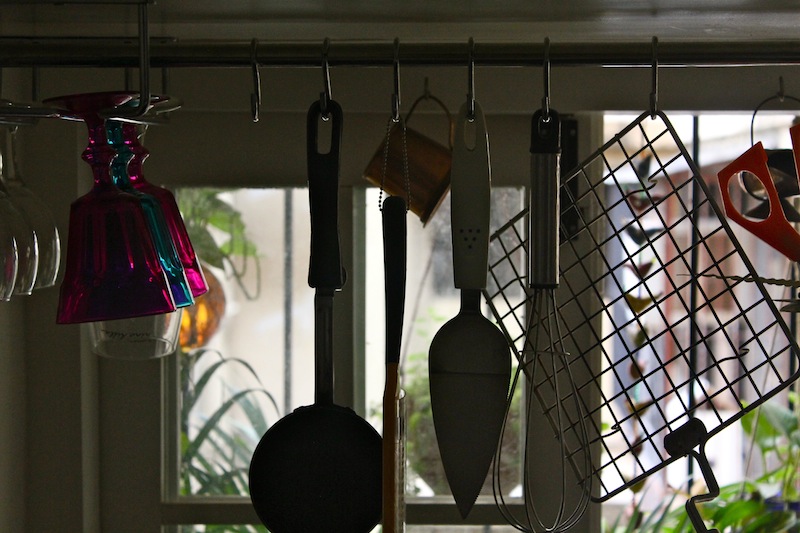 Its been ages since I have written. 6 months to be precise and so much has happened since then. I quit working with Indigo Consulting after  4 years of working with the best team in the world, we bought a new house, did a trial catering run with Bombay Chowparty, registered the house, tore it apart and put it together again while I stayed at friends for a couple of months. And finally we moved into our new home.

A house of our own after more than a decade of moving about. A place that we would create a life in. Travel and come back to. Cook food and make films and memories with friends and family..  Having resisted all trappings and roots for a long time, it finally felt right to have a space that was totally our own.  It felt like we were at the cusp of a new life…

When we initially started looking, we thought of what we wanted in a place of our own. Atul wanted a glimpse of the sky. A space where he could gaze at clouds as they float by, stars and moon at night. Staring at another building wasn’t ok with him but that excluded most flats in Mumbai. What I wanted was to be able to run away to someplace in the hills or near the ocean…somewhere to just live a quiet life of cooking, gardening, growing our own produce, lots of space to wander, silence and loads and loads of life..water, trees, wind, birds… And yet I know that’s a pipe dream too..atleast for now. So we thought of how we could find a little bit of this dream in Mumbai. A small space in the maddening city but one with lots of light, green, away from the traffic, some silence..hopefully some birds chirping, a spacious kitchen and a pretty bathroom (we maybe crazy but think about how much time we spend in there!!).

After 2 years and millions and millions of houses, nearly getting swindled by brokers a couple of times, much MUCH sweat and tears we finally saw a one bedroom apartment at the end of a tree-lined lane in Chaar Bungla. Right next to a nursery, near but not on an arterial road, close to a fabulous fresh fruit, vegetable and fish market and one of our favourite restaurants in Mumbai, it felt right. All the signs were there. It was not the house of our dreams. But with some work, it could be. We liked what we could do with it.. The living and bed rooms windows faced trees, the loo and bathroom were separate but divided by a wall that wasnt load bearing, there were lofts to offer plenty of storage and at 745 sq ft, this was a Big one bedroom apartment by Mumbai standards. Investing some money, in transforming this old apartment into our haven rather than buying a swankier shiny new building that we couldn’t really afford, felt right. 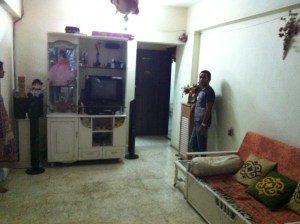 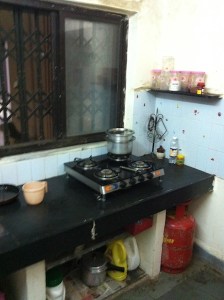 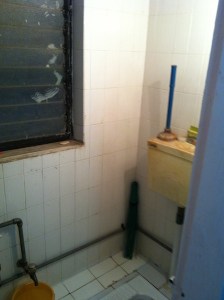 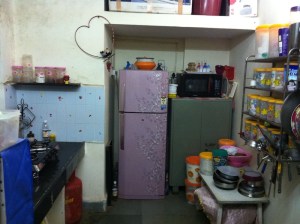 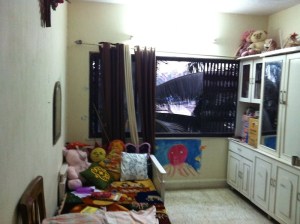 Post the painful paperwork, we put in a couple of months in gruelling labour of love.  Rolled up our sleeves and got to work. More green, more light, more fresh air. As much sky for Atul as possible and as much green for me as we could. Lots of white with neutrals colours and natural materials… No shiny tiles but matte ones that looked like exposed concrete. No jail like box grills typical to Mumbai  but big open windows with piano like panes that fold to reveal the beautiful trees outside and let in as much fresh air and breeze as possible. No unnecessary obstructing walls and everything doubling up as storage. A kitchen with as much counter-space and storage as possible and a black board to write my dreams on.

Not being able to afford what we like and not liking any of what we could afford, we decided to make most of the furniture – a faux denza, bookshelves, a dining table made of auctioned railway sleeper wood, bed with drawers to allow easy access to storage, shoe racks. Relaid wires, added switch boards and lamps wherever we could. The designer and information architect in me made a list of everything we possessed and everything we would do in each room so I could ensure the space was conducive, comfortable and convenient for everything we do or may want to.  I fantasized, obsessed, researched, dreamed, foraged and generally made life hell for all around me but had a fabulous time at it. Looked at more than 50 shops for the sofa I wanted, every shop in the Oshiwara and Chor Bazaar for lamps and chairs, every shop from Goregaon to Bandra for the tiles we wanted, all of Andheri and Chor Bazaar for the exact fittings (which we then repainted black). Hard work though this was, we both loved it (though I may have made it a wee bit difficult for Atul to do that). Loved that we were making our little haven, loved watching the transformation.. as little by little..there emerged the house we wanted to live in. 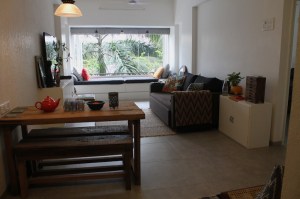 The living room, opened up. Lots of white walls to hang art on, mostly a neutral natural palette with pops of colour here and there.. 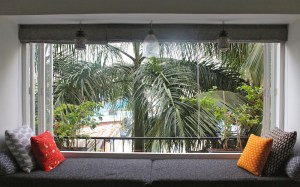 The overhauled windows that now collapse and open the room to the green outside, a wide window-seat with storage below, and the lamps from chor bazaar. This is our favourite morning place in the house. 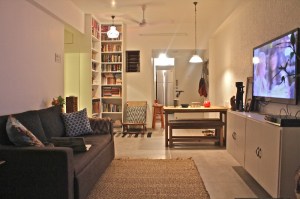 The view into the house from the window seat shows a glimpse of the kitchen along with the length of the room till the entryway. A sofa that converts into a bed and a TV close enough to feel surrounded by cinema. 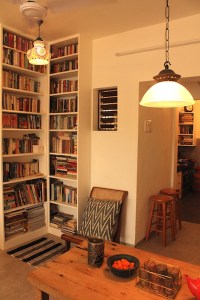 Both Atul and I have collected a lot of books that are precious to us. Loathe to give them away and yet unsure if a one bed would accommodate them, we finally decided to make a reading corner with books from floor to ceiling. A little library if you will. 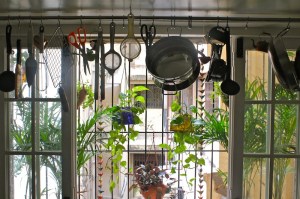 The kitchen window was important to me. Light and air, yes, but given that this is a space I will spend a lot of time in, it needed to be bright, colourful and happy. My precious tools hung up for convenience and the sheer pleasure of being surrounded by them 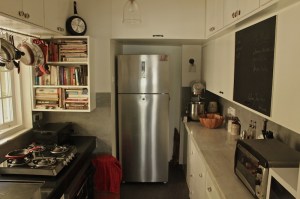 Priti spotted a clock that just HAD to be hung in the kitchen. The blackboard is a dream to note stuff on – recipes, to buys, to makes… Loads of counter space to prep and work on. Plenty of drawers and cupboards for an organised workspace. I am hoping you guys are going to see a lot of what goes on in here.. 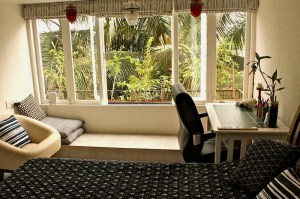 The bedroom again with the mandatory big collapsible windows here, shut half way through, my precious old bar table overhauled to made a writing desk and a cushy cushy chair (and the one I am sitting in as I type) for my favourite film maker. Bougainvillea and fragrant Raat ki Rani in window boxes on the grill ledge outside. (These are just starting to flower now and I can’t wait for them to be in full bloom) 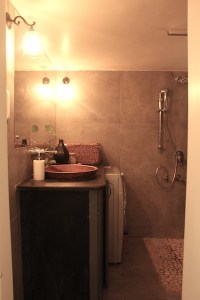 The new combined bathroom-loo with pebble flooring in the shower area and a kadappa counter in keeping with the anti-shine theme. And one our most cherished finds..a wooden basin!!

And because this post isn’t long enough already, here are the ‘before-afters’

The view from the window.. 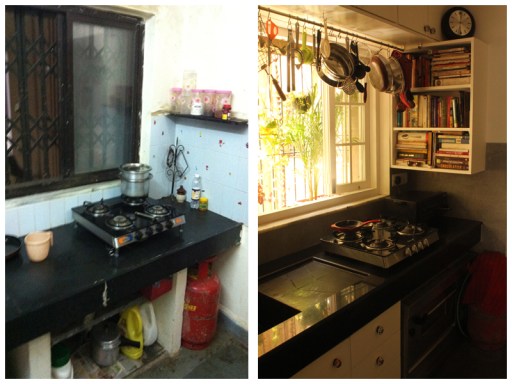 The view from the entry

The mini corridor between the living room, the bedroom and the loo 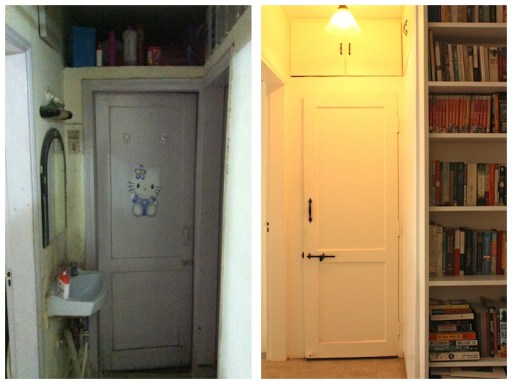 and the spanking new loo 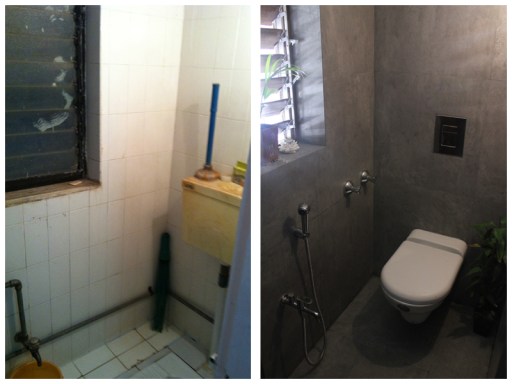 Do let me know what you guys think of the new apartment, now that its all redecorated.

Shifting to char bungalows has also been life changing in other ways..but more on that with a new recipe, soon…