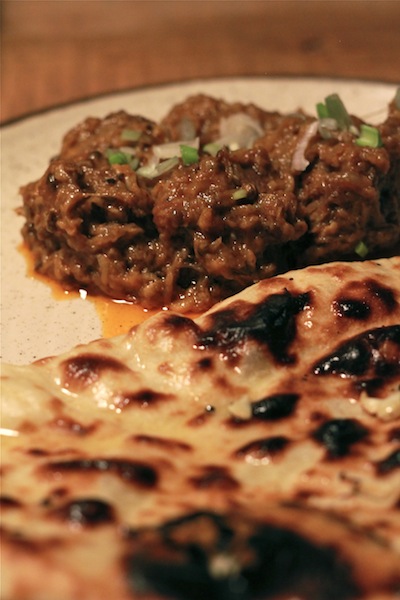 I’m going to cut to the chase here. Really there is nothing to be said except – this is probably one of the best Indian mutton dishes out there. The technique is unique, hard to screw up and plain genius. But then, why wouldn’t it be? Its Jiggs Kalras favourite recipe and he is the biggest star of Punju, nay, cooking there ever was. Maybe the original Indian celebrity chef even. Far before the likes of Sanjeev Kapoor, Tarla Dalal started popping out of the woodwork offering a mix of pseudo continental and accessible Indian recipes by the galore. 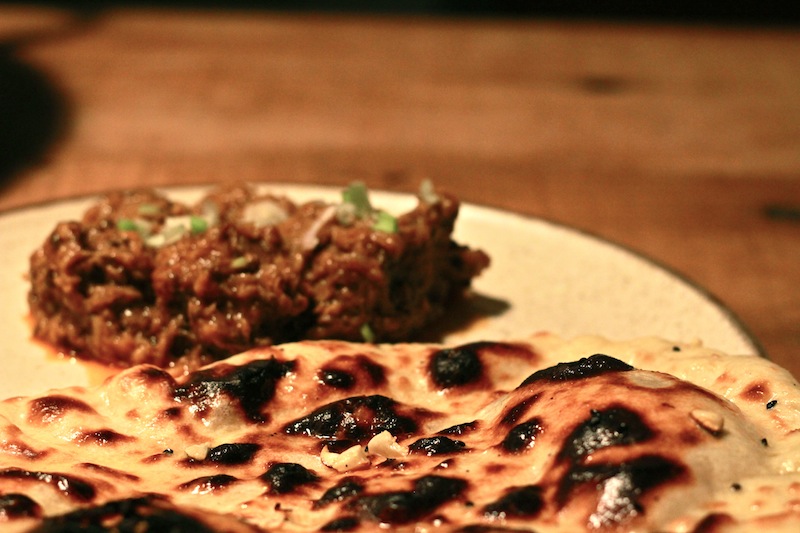 Not only is the mutton Jiggs Kalra’s favourite dish, in his cookbook Prashad Cooking with Indian Masters, he says “An integral part of every banquet ‘created’ by Lahore’s Masterchef Belli Ram – the undisputed King of Punjabi cooking prior to Partition – was this lamb delicacy.” So simple is this recipe that my initial reaction was disbelief and skepticism. What? No caramalising the onions? So many coriander seeds? Such few ingredients?.. Having read of JKs partiality towards the recipe though and trying to woo the Punju boys through food that surely their blood would recognise, I decided to give this a try anyways. And fell in love. 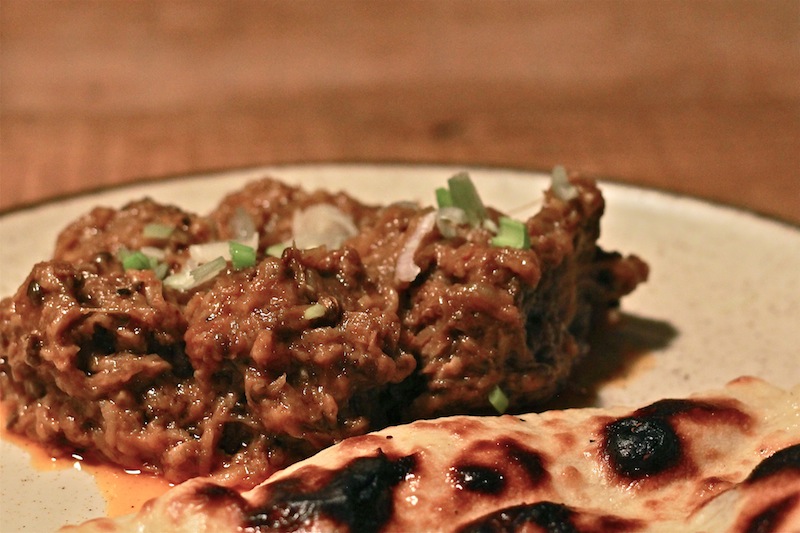 PREPARATION
THE LAMB: Clean and cut breast and saddle into 1½-inch chunks; clean chops.
THE YOGHURT: Whisk in a large bowl.
THE VEGETABLES: Peel, wash and slice onions. Scrape, wash and finely chop ginger. Peel and chop garlic.
THE MARINATION: Mix all the ingredients, except coriander seeds and ghee, with yoghurt and leave the lamb chunks in this marinade for 1:45 hours.

COOKING
Heat ghee in a handi, add coriander seeds and sauté over medium heat until they begin to crackle. Transfer the lamb, along with the marinade, bring to a boil, stirring constantly, then cover and simmer, stirring at regular intervals, until the meat is tender. Uncover, increase to medium heat and bhunno until the fat leaves the masala. Adjust the seasoning.

The Naan recipe is from the same book and after experimenting with loads and loads of naan recipes, I have decided this is my go to now. You can easily make this on the tawa, without a tandoor by placing the shaped naan on a hot tawa or pan and covering it with a lid so the naan cooks through. Turn the tawa over so the top is baked directly on the gas after. Here is an illustration of the technique. 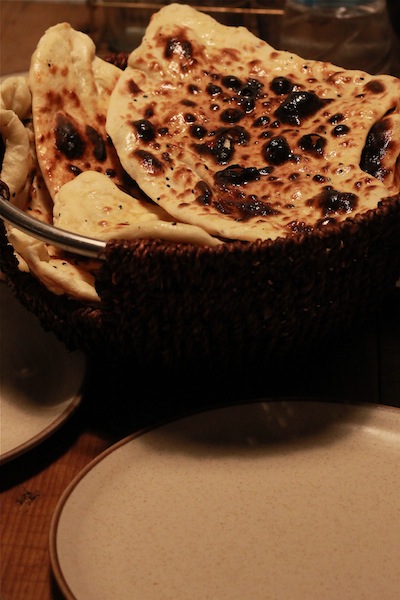 PREPARATION
THE FLOUR: Sieve with salt, soda bi-carb and baking powder.
THE EGG MIXTURE: Whisk egg, sugar, yogurt and milk in a bowl.
THE DOUGH: Make a bay in the sieved flour and pour in about 3/4 cup (200 ml) water and mix. Add the egg mixture and knead well to make a soft but smooth dough. Cover with a moist cloth and let rest for 10 minutes. Then add oil, knead again till well incorporated and keep aside for 2 hours.

Divide into balls. (Depending on the size of the naans you want to make you could get 6-9 peices out of this). Place on a floured surface and sprinkle with kalonji. let rest for 5 more minutes and then shape into a round disk with your hands and stretch to oneside to make an elongated oval.
COOKING
Bake in hot tandoor for 2-3 minutes or on a greased tray in a pre-heated oven for 10 minutes.  Remove and apply butter generously. Serve immediately. 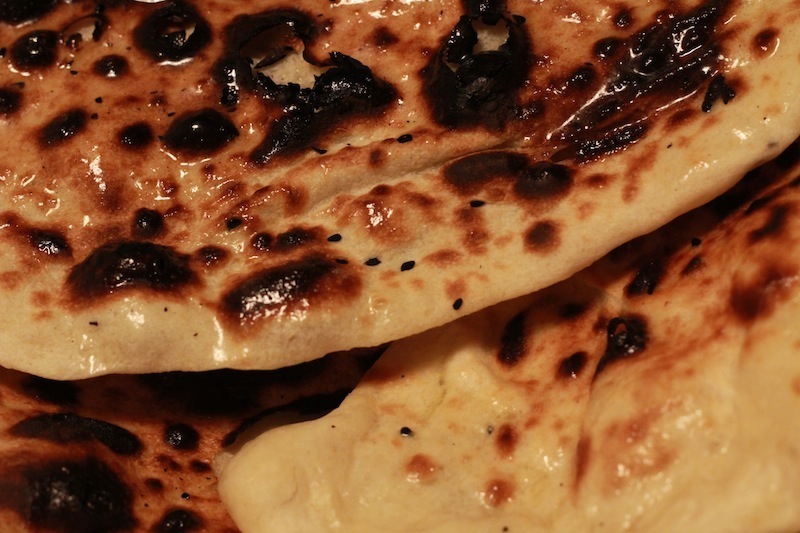 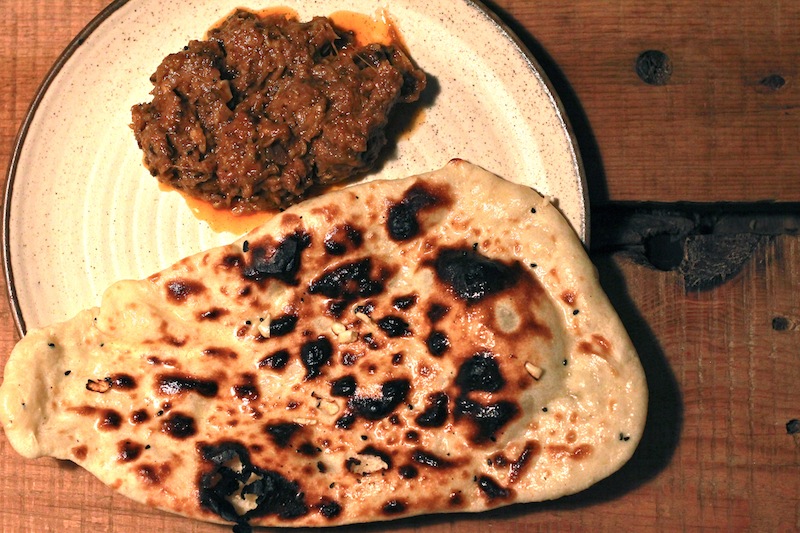