My grandmother (called chaachi by her siblings, children and grandchildren alike) was a formidable force in our family. In her white mundu, cotton top and large hoops of gold that dangled from her ears, she was ever the gracious, devout Syrian Catholic matriarch – Mother of 9 strapping lads and 2 girls, this was the real grip that kept the family, home, hearth and plantation going. Each of her kids regarded her with a mixture of fear, reverence and love. Each seemed convinced that s/he was the one she had a special bond with, her secret favourite. She had a proverb for every situation, advice for every concern, solution to every problem. What’s more, farm hands, cousins, neighbours..all sought out her secret Ayurvedic ‘green’ remedies to drive away pains, heal wounds and cure secret illnesses. To my young, citified eyes, chaachi was a rather intimidating figure. More the busy disciplinarian than the dada dadi ki kahaaniyaan type of grandmother, she was the last word on all things to do with farming, Catholicism, and upbringing of cattle and kids. And yet she was our last resort to get what we wanted out of our parents. If chaachi had agreed to a jaunt we had planned, no elder would ever have the guts to refute.

Today when I look back, more than anything else, I remember what a fantastic place chaachi’s kitchen used to be. Set apart from the main house, it was a dark, smokey little cottage with a thatched roof and dung smeared walls that housed plenty of wood for burning and huge kalams (Malayalam for pot) that persistently bubbled over smoking wood fires. Massive quantities of food came out of this kitchen.. morning breakfast for the family, morning and evening tea for workers (this was infact a huge meal of some sort of carb based stew with fish or meat curries), lunches and dinners of rice, dry vegetables, yoghurt gravies and fish/meat curries. And then there were endless pickles, sweets, savoury snacks and condiments that were always in the making. Tamarind, arack-nut, coconut, tapioca, black peppers, chillies, nutmeg, fish were always drying in the yard that separated the house from the kitchen while heaps of coconut in their husks lay in the corner, ready to be husked. At any given time there were at least 25 mouths to be fed.

One of my favourite food memories relating to my grandmother is of the baby mussels and mushrooms that she prepared specially for us. She would send a little party of holidaying city kids out to forage for the mushrooms (and out of her hair) and we would search for and eagerly bring back white, grey or brown torn sponges, caked with dirt. She would then sort and identify them. The poisonous ones would be removed and whispered over with much horror and rounded eyes while the fresh edible ones would be whisked away into the kitchen. Like all other things, when it came mushrooms, chaachi knew everything. Varieties, their names, which part of the plantation had the right pickings to offer and at what time of the year. Family legend has it, the sound of a peculiar clap of thunder, was all she needed to divine that a particular breed of rare mushrooms was ready for the picking and under which jackfruit tree foragers could find them. Those soft velvety wild mushrooms, cooked simply in coconut oil, with coconut, mustard seeds and curry leaves were a thing of absolute beauty, far superior to any mushrooms I have ever eaten since. 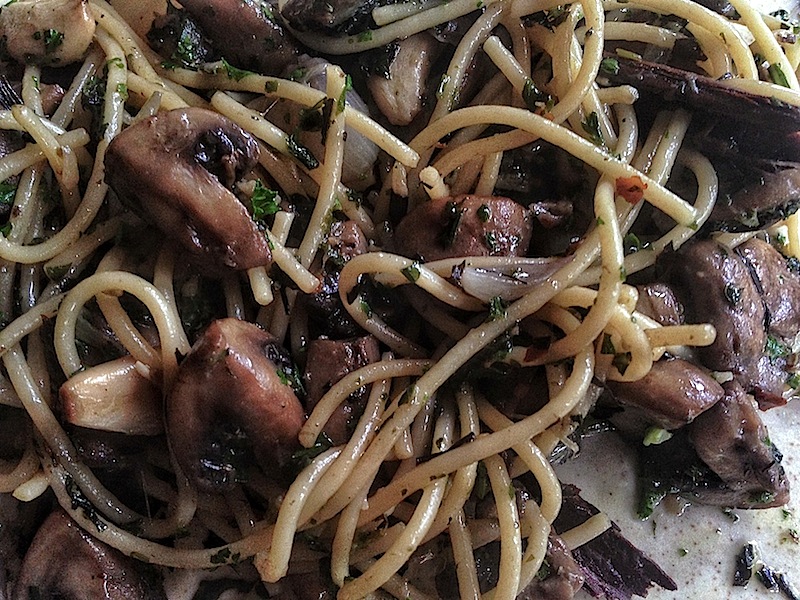 Eating mushrooms with chaachi gave ma deep and abiding love and fascination for mushrooms. That deep, smokey, woody flavour that defies all description. Part meat and part vegetable. As we grew older, varieties of mushrooms started making themselves available in the markets of the cities I lived in. It started with tinned mushrooms in brine (yuck), then the ubiquitous white ones, now the morels, porcini, shiitake, portobello and all sorts of fresh and dried versions available at groceries. As someone who likes to cook with these often, I have found my own tricks to make mushrooms work. How to make them sweat to create their own sauce, how to cook them so they caramalise and don’t sweat, how to coax most flavour into a stock, what herbs to use to bring out their notes etc. But of-course, the flavour of truly wild mushrooms is impossible to recreate with the farmed grocery store variety. While the abundantly available button mushrooms do lend themselves to a lot of different things, they do lack the personality of the ones that grow of their own will – just because they were meant to..amidst the fallen leaves of unruly, misshapen, tall trees. And just so, after having lived all my life in cities around the country, I suddenly miss the many earthy flavours of life as chaachi lived it. Honest, rustic, strong, hard-working. And deeply, deeply connected to the earth that bore and sustained her. 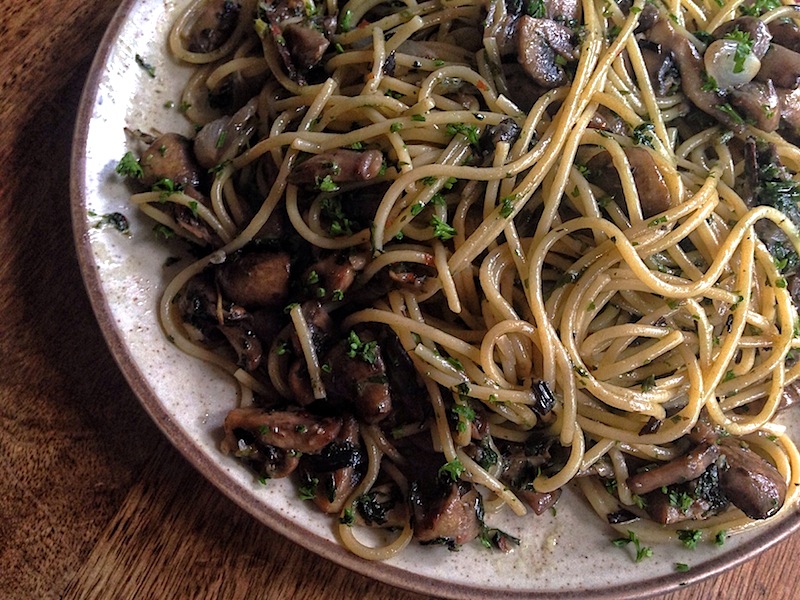 Herbed Mushroom Spaghetti (Inspired by Ottolenghi's mushroom recipe in the Guardian) Even as I berate button mushrooms, I must admit I love cooking with them. I have successfully paired them with one or many of garlic, shallots, lime, herbs, wine, cream, cheese or butter. Never before, though, have I considered adding cinnamon or anything from the fennel family to a dish of mushrooms. And if it weren't for the genius of Ottolenghi, I wouldn't have done so. It's the unusual use of spices that drew me to the idea of this dish and I think it's this combination that makes this recipe precious. Shallots have always worked wonder with mushrooms and along with the whole cloves of garlic, here they cook to a sweet soft perfection that melts in your mouth. Despite the use of garlic, shallots and spices, this dish is as different from anything that came out of my grandmom's kitchen as can be, and yet, the surprising pairing of mushroom, cinnamon, fennel and anise along with the generous use of mixed herbs did manage to coax more complex flavour from bland white mushrooms than I have ever experienced. Enough to make me all nostalgic about those ugly field mushrooms we ate with chaachi. Enough to turn this dish into one of my current favourite ways to eat mushrooms. Hope you enjoy it.
Ingredients
Directions
3.2.2929

« Homemade Ice-cream
A return to baking, my first love »